As Britain prepares to ease lockdown restrictions the general public are bracing themselves for a new kind of normal. Talk of social bubbles and the reopening of cafes has led many to speculate as to when they can book a well-deserved holiday. Boy do we need it!

As the Prime Minister is keen to stress, science alone will determine such things. What we can say with greater certainty however is Crete looks set to emerge as one of the destinations of choice post Coronavirus.

This can be attributed to the relative success of Greece in handling the crisis at large. The country has been widely praised for its swift response, one which has resulted in a comparatively low death rate compared to European neighbours.

As such the country is being described as one of the safest in the world right now. And safety has never been more important.

So what is the current situation?

As of May 6th Greece as a whole has reported 146 deaths. While tragic this figure is one of the lowest across the continent. It also defies many grave predictions made at the turn of the year.

Europe’s second oldest population, paired with a troubled economy, had many fearing the worst.

Instead reservations gave way to mobilisation and a nationwide effort to protect their health service.

Indeed Greece was one of the first to ready themselves for the upcoming war. As reported in a previous blog, carnivals were cancelled as early as February, before a single death had occurred.

By March 10th all schools and universities were closed, followed three days later by cafes, restaurants and popular tourist hotbeds.

A complete lockdown was introduced on March 22nd, with all non-essential travel banned 24 hours on.

Many saw the sacred Orthodox Easter weekend as a pivotal moment, a time in which Greeks typically travel to either the countryside or islands such as Crete to celebrate with extended family. Not so in 2020.

All churches were closely monitored, while street patrols were supported by drones overhead to keep people inside.

As has been the case here in Britain, nightly press conferences have been held by government officials to keep the public both informed and vigilant. It’s had the desired effect.

A flattening of the curve is depicted below and has prompted a return to some kind of normalcy. 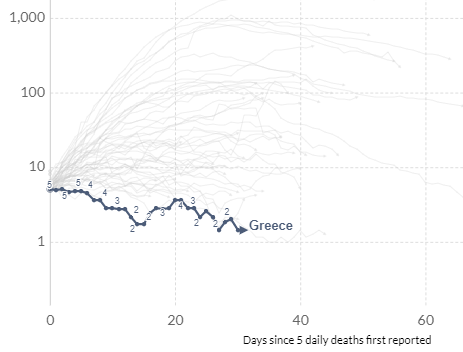 On Monday (4th) morning, salons, bookstores, repair shops and sporting goods outlets were opened for business. There is an expectation that more industries will quickly follow suit.

In short, Greece and Crete will soon be open for business. And it’s business they crave.

While keeping fatalities below 200 is to be admired, it has not been without consequence. The Greek economy, still reeling from a decade of turmoil, has been hit hard. Tourism – which accounts for 20% - has never been more important.

That’s why the UK - which, along with Germany accounts for the biggest swathe of visitors - is name-checked nightly in those aforementioned press conferences. Greece is keeping a close eye on events here in order to gauge when Brits will be permitted to travel and – more importantly – when it will be safe to receive them.

Of course our own travel ban remains in place at the time of writing. Boris Johnson’s weekend announcement, in which he’s expected to share a roadmap for a way out of lockdown, should provide a timescale for when that could cease.

The expectation is flights will restart ahead what is traditionally considered to be the peak season of July-August.

That’s when the likes of Greek Minister of Development and Investment Adonis Gerogiadis hope to welcome visitors once again.

“There are leading tour operators who have stated that they want to bring tourists to Greece instead of another country due to the successful management that has been done in our healthcare sector,” he stated.

“Just as we made the positive surprise in the health sector, we will do so with the economy,”

There is also an expectation we’ll see a spike in winter holidays this year, with families keen to embark on their annual getaway… only later than envisaged. While this marks the end of what is known as the high season in Crete, safety and not sun will be uppermost in travellers’ minds. This will be realised with villa holidays, and the isolation that comes with them, as opposed to hotel stays.

The Coronavirus is not yet won, and the effects of the pandemic will be felt for years to come. Yet in a period where positivity is so hard to come by, Greece and Crete offer hope.

Keep up to date with the latest developments in Crete during the Coronavirus by visiting our dedicated page.

Crete Escapes continue to monitor events in the region closely and will endeavour to keep our customers informed. We will assist our clients in every way possible and offer flexibility when it comes to final balance payments if necessary. We are also happy to move prior bookings to later dates or 2021, subject to availability, if upcoming holidays or flights are impacted by COVID-19. Read examples of how we’ve helped clients in recent weeks here.

PreviousNext
Back to Listing